All the recent Jack Grealish Man Utd transfer talk has unsurprisingly led to some fans getting a little over-excited on Twitter.

This means Grealish can probably expect plenty of tweets questioning him over his future for the next few months as the Independent claim the Aston Villa star is set to be one of Manchester United’s summer transfer window targets.

Amusingly, however, it looks like the 24-year-old may also have his mates to help out and deal with any difficult questions for him!

See the tweet below as Grealish’s old team-mate Lewis Kinsella, who currently plays for non-league side Aldershot Town, jokes that he’s set to join United when he was tagged in a question obviously intended for Grealish… 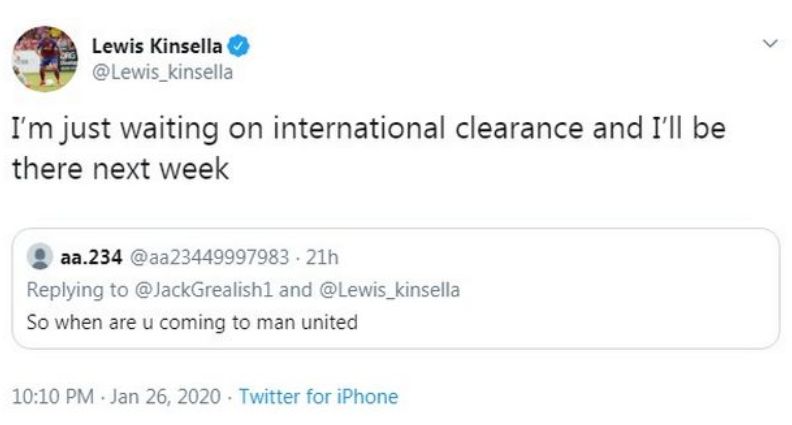 This, in fairness, is great banter from Kinsella, and Grealish will no doubt be relieved to have the spotlight taken off him for a moment.

United fans will hope, however, that by the time the summer comes they can add the England Under-21 international to their ranks.

Still, the way things have been going for MUFC of late, some fans probably wouldn’t be too surprised if Ed Woodward ended up landing them with a non-league left-back instead!