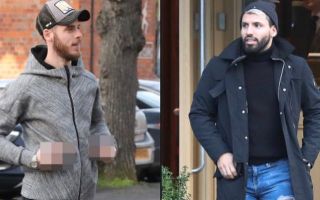 David De Gea and Sergio Aguero go a long way back to their Atletico Madrid days, and it appears as though the pair enjoyed a bit of banter this week.

While they’ve been rivals for some time now having been on either side of the Manchester divide, it seems as though they can still enjoy a bit of light-hearted fun with each other.

According to the Sun, the pair crossed paths at a restaurant in Hale Village, Cheshire, and De Gea greeted him by sticking up his middle fingers at the Argentine, as seen in the photo below.

It’s added that the pair had a short catch up before going their separate ways as it was all in jest from De Gea, as they will now prepare for their League Cup clash against each other with Man City holding an advantage over Man Utd ahead of their second leg meeting.

Time will tell who advances to the final, but De Gea will be hoping to deny Aguero a chance to put the tie to bed before Man Utd can at least give themselves a chance of turning things around.

David de Gea dey tell Sergio Aguero f**k you. My keeper dey petty, i like am like that ??#mufc pic.twitter.com/dRvr2NazQg