After a lot of confusion, it seems Genk midfielder Sander Berge is not arriving for a medical at Manchester United today after all.

This surprise rumour emerged out of nowhere today when Samuel Luckhurst of the Manchester Evening News claimed to have seen Berge on his way to Man Utd’s Carrington training ground for a medical.

This was then picked up by the Sun and others as pictures emerged appearing to show someone who looked a lot like Berge in a car heading to Carrington. 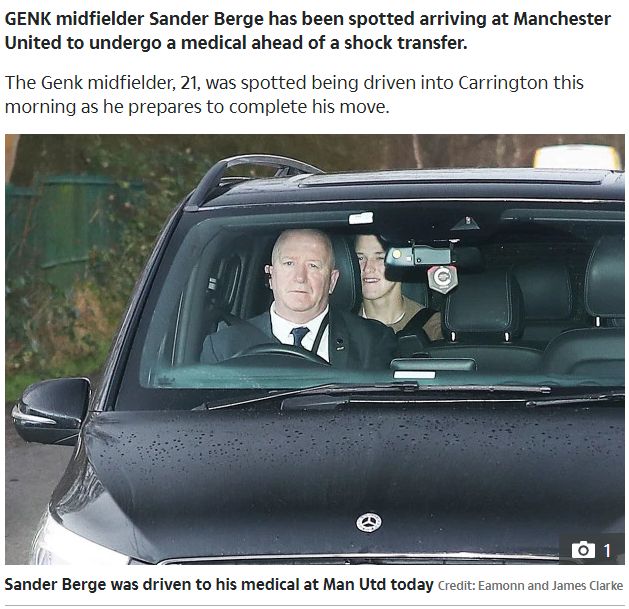 However, Luckhurst has since tweeted to apologise for the confusion, as this is actually a different player seemingly heading to Old Trafford, which perhaps makes more sense as news of such a big potential signing would surely have seen more speculation and build-up beforehand…

A player has been pictured driving into Carrington and eyewitnesses said he was waved through for a 'player medical'. Player looks a bit like Sander Berge but is apparently not him. Apologies for earlier confusion/chaos.

Berge could have made sense as a target for United given their struggles in midfield this season, with Scott McTominay and Paul Pogba currently out injured.

The young Norway international looks a top talent and could one day get a move to a big club, but it seems it won’t be MUFC on this occasion.

Arsenal have held talks over potential £35million transfer
Aug 12 2021, 12:00
Arsenal FC
Arsenal tell Sheffield United they will pay £50m to complete transfer on one condition
Aug 5 2021, 13:35
Arsenal FC
£30m-rated star back on Arsenal’s radar amid lack of progress over Maddison and Locatelli
Aug 2 2021, 7:00
Arsenal FC
Tottenham in talks with Championship outfit over €22M signing of midfielder
Aug 1 2021, 22:47
Tottenham FC
Arsenal make decision on whether to activate target’s £35m release clause
Jul 16 2021, 20:10
Arsenal FC
Arsenal could sign two stars from relegated side as potential for a compromise on the price grows
Jun 26 2021, 15:01
Arsenal FC
Arsenal could land a key target for less than half of the initial £35m asking price
Jun 18 2021, 12:54
Arsenal FC
Transfer boost for Arsenal as key target’s release clause lowered by €10m
Jun 8 2021, 14:06
Arsenal FC
Arsenal in pole position to sign Premier League star if they alter the structure of their offer
Jun 2 2021, 16:59
Manchester United FC
Arsenal rival Liverpool for midfielder transfer by ordering scouts to compile dossier on star
May 13 2021, 8:06
Liverpool FC