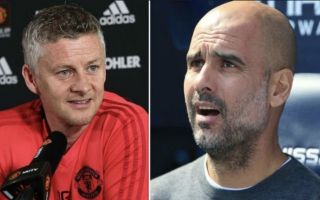 Manchester United manager Ole Gunnar Solskjaer has sent a message to his players as he bids to inspire an unlikely comeback away to Manchester City in the Carabao Cup semi-final second leg.

The Red Devils lost 3-1 at Old Trafford in their first meeting, so have a real mountain to climb as they take on City at the Etihad Stadium tomorrow evening.

Still, Solskjaer was in charge when United staged an incredible turnaround away to Paris Saint-Germain last season, with a shock 3-1 win at the Parc des Princes sending the team through on away goals in that Champions League last-16 clash.

United were in a similar situation that night, going into the game two goals down on aggregate, and Solskjaer has reminded his players to think of PSG when they attempt to repeat the trick against City.

The Norwegian tactician was also able to call on his players to remember their recent win away to their rivals in the Premier League.

“I have to say the second part of that first half they outplayed us for a while and it’s hard, but then we got the goal, back in it, we hope for another one but got to go into the memory bank and think PSG,” Solskjaer told his press conference, as quoted by the Manchester Evening News.

“It has to be a perfect performance to win with two goals against such a good team away from home, for us it’s not about away goals, we just need to score two more than them.

“When it happens, how it happens, it would be good not to concede first, because that makes it less difficult.”