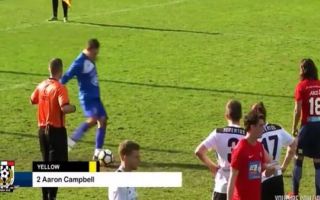 This immediately evokes memories of Brazil vs Zaire in the 1974 World Cup, when the Zaire defender panics in the build up to a free kick and simply hammers the ball away before it’s taken.

Stories have since emerged about the regime back in their home country and the pressure that the Zaire players were under, so it’s understandable. This recent example looks a bit more calculated from the keeper.

As the penalty taker places the ball on the spot and waits for the ref to blow his whistle, the keeper comes out and hammers it up the pitch:

In the end it proved a wise decision, as he did get booked but it also resulted in a poor effort from the taker, and he was able to get down and save it.