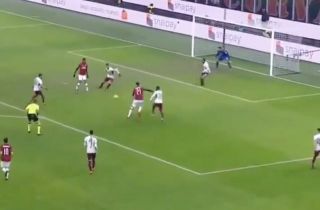 AC Milan were involved in a thrilling Coppa Italia tie with Torino on Tuesday night, and they eventually prevailed 4-2 after extra-time.

In a back-and-forth encounter, the Rossoneri took the lead through Giacomo Bonaventura early on but fell 2-1 behind as nerves would have been building over a possible exit from the competition.

However, substitute Hakan Calhanoglu stepped up and scored a brace to put them back in front, and Zlatan Ibrahimovic added the icing to the cake to wrap up the win, as seen in the video below.

It was a nice move from Milan as Rafael Leao eventually rolled it into Ibrahimovic’s path, and the Swede produced a brilliant finish to guide his effort into the back of the net beyond the goalkeeper’s reach.

Fortunately for the veteran, it would have spared his blushes as he missed a sitter earlier on, but Milan found a way to get the win and they’ll now face Juventus in the semi-finals.

First goal back at the San Siro for Milan since 2012 ?