Tottenham have announced the completed transfer of Steven Bergwijn from PSV this morning in what looks an exciting move for the north London outfit.

Bizarrely, however, PSV also seemed kind of excited to be letting their best player go, with their Twitter account putting this tweet out moments before the move was made official… 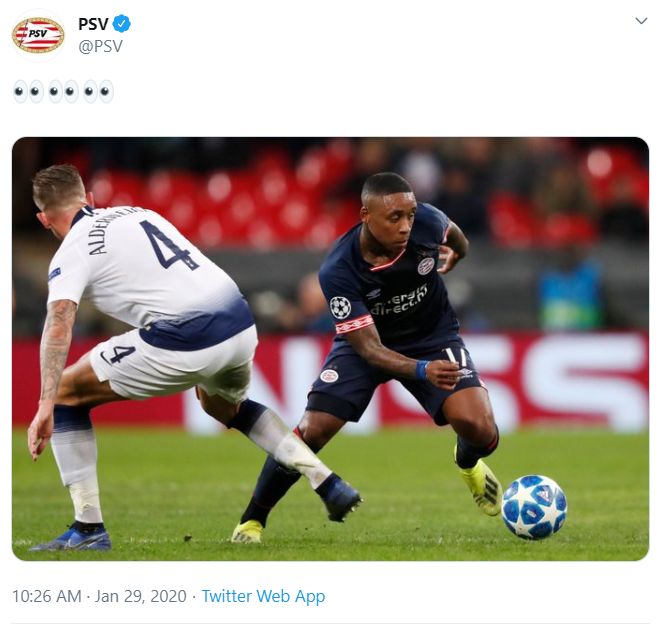 This is the sort of social media content you might expect from a club about to announce an exciting new addition, but it’s unlikely to go down well with your own fans when you’re letting a talent like Bergwijn go.

The Netherlands international has shone at PSV and will surely be missed, so we’re not sure fans are going to take too kindly to tweets like this.

Video: AFCON minnows Comoros get one back against Cameroon with stunning long-range free-kick
Tottenham are closing in on top target as they prepare to let defender move to Serie A giants
Marseille star man could be on his way to Leeds for as little as £10m if Marcelo Bielsa moves quickly

Tottenham fans, meanwhile, can celebrate a much-needed signing up front to help cope without the injured Harry Kane for much of the rest of the season.

See below for the Spurs announcement, as they welcome Bergwijn to the club on a deal running until 2025…

?? We are delighted to announce the signing of @StevenBergwijn from PSV Eindhoven.

Steven has signed a contract with the Club that will run until 2025.#WelkomBergwijn ?? #COYS