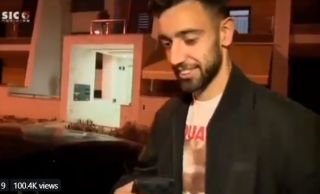 We may finally see Bruno Fernandes seal a transfer to Manchester United after lengthy speculation this January and last summer.

As reported by Fabrizio Romano in the tweet below, Fernandes is expected to get the green light to complete his move to Old Trafford.

Bruno Fernandes is “ready to fly” today to Manchester with his agent Miguel Pinho. They’ve flight scheduled on next hours – the contract until June 2024 is almost ready.

‘Green light’ expected by the two clubs, then the deal will be completed and announced. ? #MUFC #Bruno

On top of that, Romano claims Fernandes and his agent should be flying to Manchester today to wrap up his transfer.

And in the video below, Fernandes has hinted this is all true by saying it was always his preference to move to the Premier League…

Video: Bruno Fernandes gets stopped by Portuguese media to answer questions about the PL and Man Utd.

Interviewer: “The English league, is that your preference?”
Bruno: “ It always was”
Interviewer: “Manchester United?”
Bruno: “Anything Really”
?? #muzone pic.twitter.com/WyfCfOgQli

The Portugal international is also asked about Man Utd specifically, but doesn’t give too much away by suggesting he’d be happy with”anything really” in England.

Still, it looks like Red Devils fans can finally get excited about this signing, which should majorly strengthen their midfield and boost their hopes of making up ground in the battle for a top four spot.