It’s starting to become clear that the videos that emerged last night did actually show some fans throwing flares as Ed Woodward’s house so things have gone too far.

A look online shows a clear split between those condemning the actions and others who claim it’s a publicity stunt designed to generate sympathy for Woodward after a shambolic few years.

If we take it at face value, we can see a house being attacked that might have had kids inside, all because their Dad is widely seen as incompetent at his job.

As a result, an unlikely figure has come out and spoken in support of him, despite many recent tensions between himself and Woodward.

Mino Raiola is widely known as a “super-agent” to many of the world’s best players, and his clients include Paul Pogba and Erling Haaland.

A story from The Athletic (subscription required) has shown that Raiola has come out and condemned those “fans” who were behind the attacks. He calls for them to be locked up and admits that he and Woodward don’t always agree on business matters, but also says that football isn’t really that important.

He said: “If anyone has used me as a reason to create any anger towards Ed, they are totally in the wrong because my relationship with Ed is good, it is professional, and we don’t always need to agree but that’s normal. What happened last night is not normal. It is violence and I condemn any type of violence. These guys are morons and this is criminal behaviour. 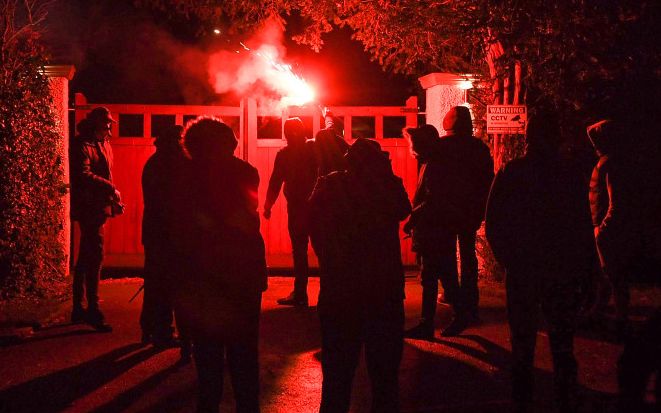 These images have emerged from last night

“These people need to be locked up and re-educated. This cannot be part of sport. This is sport — S P O R T. This is not a question of life and death. It is EN-TER-TAIN-MENT.

“Do you think people attack the house of Brad Pitt if he makes a bad movie? Or does Quentin Tarantino get death threats because his film was not good? There is no reason or excuse, none whatsoever for this, and Ed Woodward has my full support and solidarity.

“I totally disapprove,” he added. “I am with Ed Woodward — I’m on his side in this.

“In the dark ages, the biggest problem with English football was violence in the stadiums. When they resolved that, the Premier League started growing and is today what it is.

“I disapprove of violence against players, trainers, supporters, anyone, and especially this kind of violence and harassment. This is not how things should be done, this is not correct, this is not part of the game and we should condemn any form of violence anywhere and that’s what I’m doing — I’m totally on his side.

“In a country like England where people are so known for their class, for their upbringing, for their education… for a Premier League that grew because of its eviction of violence. This cannot be happening to a man — going to his private house and menacing him and his family. Are we totally crazy? Football is not that important in life.

“I am behind Ed 100 per cent and I think everybody in football should stand in support, whether you agree with him or not. It’s not important if you agree with him or not like in business — this is not business, it’s violence and everybody should stand with him. Nobody has the right to attack your house and menace your family. What would have happened if his children were home? Are we totally crazy? Is this England?!

“It is a total lack of respect and I don’t care who or what is to blame for this. We have to condemn it. Everyone has their own responsibility. Don’t hide behind social media or say someone told you to do something.

“There is no place for violence inside or outside the stadium, and especially when it involves your house and your family. This is inadmissible.”

This comes just weeks after The Express reported that Raiola was furious with United for their efforts to sign Haaland, he criticised their transfer strategy and approach – something which is mainly handled by Woodward.

Even if you are a United fan who’s angry at this, it’s hard to justify going to these lengths. There’s still no sign of arrests or anything at this point, but it must be bad if Raiola is starting to feel sorry for him.