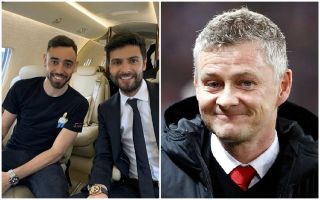 Italian journalist Fabrizio Romano has shared an image of Sporting Lisbon star Bruno Fernandes and one of his representatives boarding a plane to Manchester.

The Manchester Evening News’ Samuel Luckhurst reports that Fernandes is alongside his agent Miguel Pinho.

The Red Devils officially announced their move for the 25-year-old just before 5pm, the deal is now only subject to a medical and the agreement of personal terms.

According to Portuguese outlet Record, United will pay an initial fee of €55m (£46.6m) for the playmaker, with the report also adding that Sporting could net a further €25m (£21.2m) in add-ons.

Here’s the pictures that will get the hearts of United supporters racing:

Fernandes has contributed an impressive 15 goals and 14 assists in 28 appearances across all competitions this season, he may be the creative spark that United need to get back to the top.

The Portugal international could be the creative spark that the side need to mount a serious challenge for a top four spot ahead of rivals Chelsea.