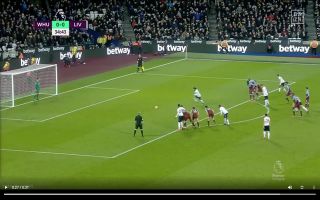 In the 33rd minute of this evening’s Premier League clash between Liverpool and West Ham, the Reds were awarded a penalty after Divock Origi was brought down just outside the six-yard area.

Liverpool superstar Mohamed Salah stepped up to the spot and sent Lukasz Fabianski the wrong way with a fine penalty.

VAR was consulted briefly before the spot-kick was taken.

Take a look at the superstar’s spot-kick below:

Liverpool convert from the spot! ? pic.twitter.com/KvJVgeXEm4