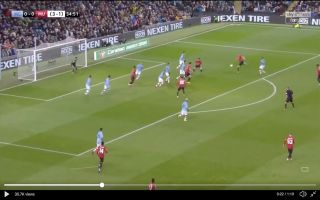 In the 35th minute of this evening’s mammoth Carabao Cup semi-final tie between Manchester United and Man City, the Red Devils took the lead after a moment of magic from Nemanja Matic.

Fred whipped a free-kick into the box from the left flank and Manchester City playmaker Bernardo Silva headed the ball away.

The ball dropped into Matic’s path and the midfielder blasted the ball into the back of the net with a superb half-volley, there was no chance of Claudio Bravo stopping this rocket of a strike.

Take a look at the Serbian’s fine opener below:

Matic unleashes a fierce low shot from 15 yards, which beats Bravo at the near post!