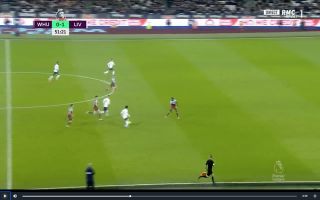 In the 51st minute of this evening’s Premier League clash between Liverpool and West Ham, the Reds punished the Hammers on the counter-attack.

Jordan Henderson sparked an opportunity on the break with his pass into Mohamed Salah, the Liverpool superstar picked out Alex Oxlade-Chamberlain’s run with a fine outside-foot pass.

The Ox showed his impressive strength by sending Manuel Lanzini to the floor before tucking the ball into the back of the net with a tidy finish.

Oxlade-Chamberlain had the ball across the line just 8 seconds after Henderson’s pass to spark the chance. Jurgen Klopp’s men are absolutely rapid on the break.

Take a look at the Ox’s strike for the Reds below: