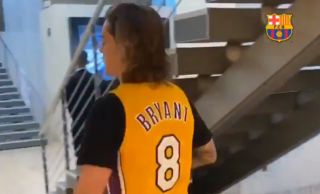 The France international has turned up at the Nou Camp in a Los Angeles Lakers top with Bryant’s name on the back, following the basketball legend’s tragic death last week.

Bryant’s death has sent shock-waves throughout the entire sporting world, with many footballers paying tribute to him on social media following his passing on Sunday.

It’s nice to see Bryant meant so much to so many people, and Griezmann’s tribute tonight is a simple but touching one.