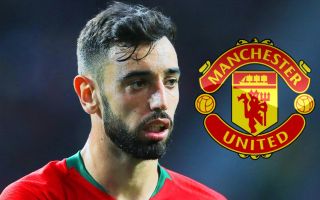 Watch the video clip below in which Lewis gives a brutal assessment of Man Utd’s recent work in the transfer market.

Despite Fernandes being another big name to join the club in recent times, Lewis thinks he’s likely to go the same way of flops like Alexis Sanchez and Angel Di Maria.

“I’m worried for him, actually!”

“If Lukaku had people invested in making him better, he would’ve been.”@MirrorDarren is concerned for Bruno Fernandes, after signing for #MUFC pic.twitter.com/jVvTqacrXM

Romelu Lukaku has, rather damningly, improved since leaving MUFC for Inter Milan in the summer, with Solskjaer not getting anything like this kind of form out of him.

Will Fernandes be the next victim as he joins a club without a real plan for how to fit in all the players they bring in?