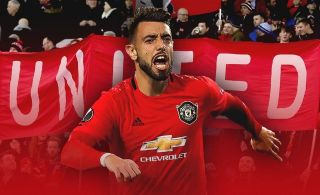 The Sporting Lisbon attacking midfielder has long been linked with the Red Devils and a final official announcement from the club is surely now not far away.

See above as Fernandes poses alongside his signed contract in a United tracksuit, though we’re yet to see him with his new shirt and squad number.

The Portugal international should be a quality signing for MUFC, who have long looked in need of more spark and goal threat from midfield.