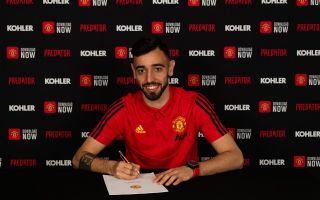 Manchester United new signing Bruno Fernandes has spoken out on his long-running love for the club after his transfer was announced this evening.

The Portugal international has just joined United from Sporting Lisbon and looks an exciting new addition to Ole Gunnar Solskjaer’s squad in a position in which the team had been weak.

United fans will be excited about seeing Fernandes on the pitch as soon as possible, and will also no doubt be thrilled to learn of how he ended up becoming a follower of the Red Devils in the first place.

Speaking on Man Utd’s official site as they confirmed the deal, Fernandes admits he really became a follower of the club when he watched the legendary Cristiano Ronaldo playing for them.

“My love of Manchester United really started when I used to watch Cristiano Ronaldo play and ever since then I have been a big fan of this great club,” the 25-year-old said.

Fernandes: “My love of Manchester United really started when I used to watch Cristiano Ronaldo play and ever since then I have been a big fan of this great club. For me to now play for Manchester United feels incredible.” pic.twitter.com/SZg4ojqw5N

“For me to now play for Manchester United feels incredible, I have worked hard to get to this moment and I can promise the fans that I will give everything for the badge to help bring us more success and trophies.

“I want to thank Sporting for everything they have done for me. It is surreal to hear the nice words that have been said about me from players that used to play for this team.

“A massive thank you to Ole (Solskjaer) and everyone at Manchester United for the trust they have shown in me and I can’t wait to start to repay that on the pitch.”

Ronaldo remains one of United’s greatest ever players, so this is a good way for the new boy to endear himself to the Old Trafford faithful.

MUFC supporters will now just hope Fernandes can go on to be just as successful as Ronaldo was during his time in Manchester.