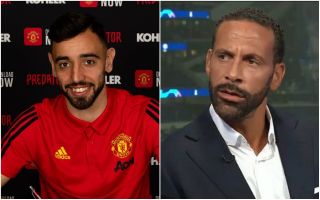 Manchester United legend Rio Ferdinand has responded to the completed transfer of Bruno Fernandes with an interesting video post on his YouTube channel.

The former Red Devils defender is clearly excited about what Fernandes can bring to Ole Gunnar Solskjaer’s side after his impressive record for goals and assists from midfield at previous club Sporting Lisbon.

The Portugal international looks just what United need in midfield, with Solskjaer currently missing key players in Paul Pogba and Scott McTominay due to injury.

United fans will hope he’s right, with Pogba never quite getting going in his time in Manchester so far, though that could arguably be down to the poor quality he’s had around him in that time.

Fernandes could be just the midfield partner Pogba needs, and Ferdinand also makes a good point as he hints that it could force the 26-year-old to raise his game and show he’s still Man Utd’s main man in that position as he fights for his place in the France squad for Euro 2020 this summer.