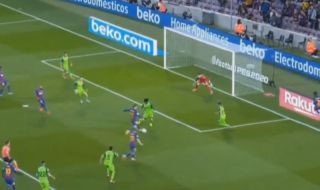 Barcelona have taken the lead against Leganes in tonight’s Copa del Rey clash thanks to a well-taken goal by Antoine Griezmann.

Taking up a central position, the Frenchman shows great composure and quality to find the back of the net as he now looks the most likely replacement for the injured Luis Suarez at centre-forward.

Foot Mercato have linked Barca with Monaco front-man Wissam Ben Yedder as it’s been widely expected the Catalan giants could try to sign a new striker this January.

However, this Griezmann goal surely shows he’s more than up to the job of shifting into a slightly new role, albeit one he has occasionally played in his career.