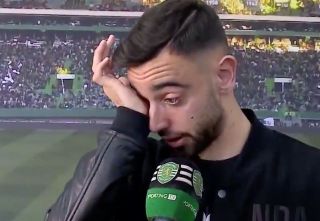 Bruno Fernandes has given a last interview as a Sporting Lisbon player and as seen in the video below, it was an emotional time for the midfielder.

The 25-year-old is set to complete a €55m+ move to Man Utd ahead of the January transfer window deadline, ending what has been a stellar spell with the Portuguese giants.

Based on the video below, there is no doubt that his time with the club will be remembered fondly as he fought back the tears throughout the interview.

This level of passion and emotion will no doubt be great to see from a Man Utd perspective though as the Red Devils faithful will be desperately hoping that Fernandes can be equally as influential for them and go down as a key figure in United history, just as he has done with Sporting.

With his medical scheduled for Thursday, it seems it is a matter of time before Fernandes is officially unveiled as a Man Utd player, but he’ll no doubt carry Sporting close to his heart moving forward.

“The words are short for what I lived here,” he said. “There were important moments that made a mark on my career.”

“This is not easy,” he says with a smile as the emotions begin to build. “Obviously, it will mark me forever.

“The fans, the people who worked with me, everything, the players, everything. I will only keep the positive things because I want people to remember me for the positives.

“I will always remember Sporting for the positives. Me and my family were always well-received. We had lots of kindness from everyone, nothing was ever missing.

“And I am not a Lion from the cradle but I will be from now on.

“All I can do is thank them for everything. “I hope that you star with good memories for me and I will always take you in my heart.”