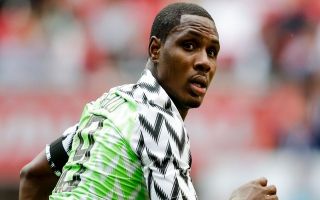 According to the Mirror’s John Cross, Manchester United have agreed to sign Odion Ighalo from Shanghai Shenhua on a loan deal.

John Cross has also reported that the Nigerian forward is due to arrive in the UK tomorrow, Cross reiterates that clubs are awarded extra time to complete transfers if deal sheets are submitted.

It seems as though the Red Devils have pulled off a late deal to bolster their forward options. With Marcus Rashford injured, Anthony Martial and Mason Greenwood are the only forwards with senior experience.

Told Odion Ighalo to Man United is agreed and loan deal will be done and completed before transfer deadline. What a story.

Ighalo due to arrive tomorrow. Deal is agreed. Don’t forget clubs get extra time as long as deal sheets are in. As long as VAR doesn’t intervene, he’ll be a Man United player. Loan with a view.

The 30-year-old spent two-and-half-years in English football with Watford. Ighalo was sensational for the Hornets in the 2015/16 season, scoring 15 goals and registering three assists.

This signing certainly seems to have caught everyone by surprise, it may not have been the high-profile addition that fans would’ve liked – but Ighalo boasts top-flight experience that could prove to be valuable.

Cross also claimed that the deal is a ‘loan with a view’, is this a hint that a permanent move to Old Trafford could be on the cards for Ighalo?