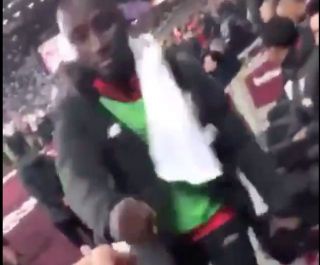 Naby Keita comes across as a very likeable guy who goes under the radar and loves his football. With that in mind, the Liverpool ace didn’t deserve this treatment.

As seen in the video below, as the Reds midfielder takes his place on the bench for Liverpool’s clash with West Ham in midweek, a fan has filmed his meeting with him.

However, as the clip continues, he initially stretches out his fist to seemingly greet the 24-year-old, but he quickly whips it out of sight from the camera shot as Keita is left looking confused and shocked.

It’s a classic prank that we’ve all done at some stage in our lives, but poor old Naby got plenty of sympathy after the video went viral, and even non-Liverpool fans were calling this particular supporter out for being a bad sport as seen in the tweets below.

There are characters in the game that you would love to see this happen to, but leave Naby out of it surely…

If I ever catch the guy who did this it’s on sight pic.twitter.com/mdVxrHXX81

Nah can’t do him like that I feel bad ?

Fam even I feel bad for naby here?

Fam even I feel bad for naby here?

The thing is, these are the same type of c**ts that complain about footballers being arrogant and not interacting with fans, not signing autographs etc. Now because of this guy, Keita’s going to think twice about doing the same for another supporter