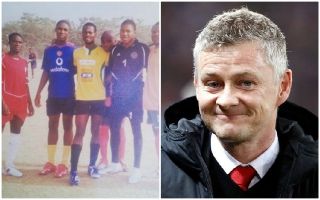 An image of a young Odion Ighalo wearing a Manchester United shirt has emerged as the Red Devils agree to sign the Nigerian forward.

United have announced the arrival of Ighalo on loan until the end of the season on their official site, with the club describing the 30-year-old as a long-time fan.

It seems there could be some truth to that as a report from the Daily Star shows Ighalo wearing a Man Utd away shirt in 2005. The United badge is centred on the blue kit.

The Star add that this image is from that year, whilst Ighalo was still in Nigeria before heading to Europe to forge a career in the beautiful game.

Take a look at Ighalo sporting the shirt as a youngster:

A childhood dream could be about to come true… Check out which boyhood Manchester United fan is wearing a #MUFC top in this photo. #Ighalo pic.twitter.com/ibizwid9gC

This is a reminder that you should never give up on your dreams – Ighalo is on the brink of living his at the age of 30.

Ighalo has previously shone in the Premier League in a spell with Watford, and has also played for the likes of Udinese and Granada in his time in Europe.