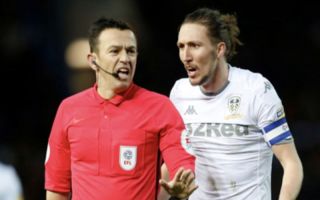 Despite sitting top of the Championship, not everyone is happy at Leeds United. Club officials were left furious from the refereeing decisions of match-day official Darren England, and have put forward 17 separate incidents for league authorities to review, the Yorkshire Evening Post report.

Writing in the club’s match programme ahead of today’s clash with Wigan, chief executive Angus Kinnear has described the club’s frustration with the standard of refereeing in England’s second division.

Leeds were trailing 0-2 at the break, and Millwall were awarded a penalty just seconds after the home side players believed the ball had gone out of play.

Another decision brought into question is that of the referee awarding Millwall a goal kick after their ‘keeper Bartosz Bialkowski made a brilliant save.

Whites CEO Kinnear was clearly left aghast at some of the decisions made, to the point where he felt forced to add “simply not paying attention” to his list of concerns.

In all, Kinnear feels that as many as ten points have been essentially robbed from his team in their promotion chance thanks to poor officiating during the season.

“I am confident that Leeds United provide the most comprehensive post-match feedback of any Championship club. Our report on the Millwall game highlighted 17 separate decisions that we felt were worthy of review and, to the credit of the assessors, they will review the video of each decision and provide a perspective in return,” the programme notes read, but Kinnear also emphasised that he was keen not to buy into conspiracy theories.

In the end, Leeds pulled off a remarkable comeback to win the game 3-2 and reclaim the top spot in the Championship. They take on Wigan Athletic in Elland Road today at 3pm.