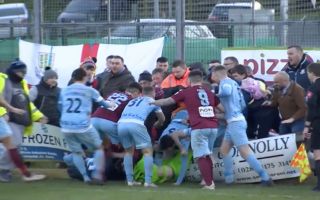 A game in the sixth round of the Irish Cup descended into chaos on Saturday, as the goalkeeper for the home side ended up fighting amongst the crowd at the end of the encounter.

Ballymena United beat Warrenpoint Town with a late goal from Andy McGrory to send his side through to the quarter final.

Shortly after the winner, Warrenpoint goalkeeper Mark Byrne ended up in the stands fighting away supporters. The brawl saw the fence separating the spectators from the playing pitch collapse, as dozens were involved in the out-of-control melee.

Warrenpoint Ballymena match ends in carnage with the keeper in fighting with the crowd. pic.twitter.com/ABZ5xrR4hH

Some fans on Twitter allege that the incident was sparked by goalkeeper Byrne reacting to something that was said from away fans behind his goal.

Ugly scenes at the end of this afternoon’s game between Warrenpoint and Ballymena.Something was apparently said from the crowd at the Warrenpoint keeper from behind the goal .Mark Byrne reacted.Ugly scenes developed as a fence broke . pic.twitter.com/SSAHnNJArp

Ballymena fans trying to put the full blame on the keeper and warrenpoint. Something has clearly happened that had made the lad react the way he did

The fight took place just one day after the Irish FA released a statement condemning “unacceptable spectator behaviour” at matches, the BBC report.

It remains to be seen who takes the blame for this ugly incident but it is likely that the admin department at the Irish FA will have a field day!