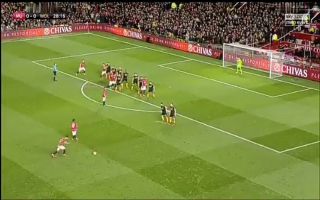 In the 28th minute of this evening’s Premier League clash between Manchester United and Wolves, the Red Devils’ new signing Bruno Fernandes stepped up to take his first free-kick for the Red Devils.

The Portuguese playmaker stepped up to take the indirect free-kick from around 40 yards out but his cross flew over everyone in the box and went out of play.

Some rivals fans appear to be mocking Fernandes’ attempt on social media, is it harsh for some football fans to jump on this blunder?

Being consistently deadly from set-pieces is no easy feat, we think this slight error should be allowed to slide – it’s only Fernandes’ debut.

Take a look at the playmaker’s unflattering moment below:

What a ball from Bruno FERNANDES he's absolutely gonna rip the prem to shred????? pic.twitter.com/ph86BaNHGm