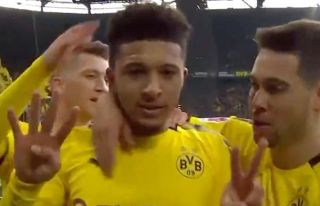 Borussia Dortmund secured a 5-0 win over Union Berlin on Saturday, with Jadon Sancho getting the scoring started after just 13 minutes.

A double from Erling Haaland and goals from Marco Reus and Axel Witsel wrapped up the comprehensive victory as the Bundesliga giants sit third in the standings.

However, there was also a touching moment involving Sancho, as seen in the video below, as the England international paid tribute to former NBA superstar Kobe Bryant who tragically lost his life in a helicopter crash last week.

Bryant was widely respected and loved around the world by fans and other athletes alike, and that has been evidenced with the number of stars who have paid a public tribute to him over the past few days.

He clearly had an impact on Sancho too for him to dedicate his goal to him, as thoughts and prayers remain with his family after his daughter Gianna Bryant also sadly passed away in the tragic accident.

The first Bundesliga player to score 25 goals before turning 20. pic.twitter.com/KZPacphE22