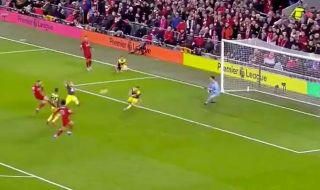 Liverpool look set to continue their relentless march towards the Premier League title as Jordan Henderson put them 2-0 up against Southampton on Saturday.

Alex Oxlade-Chamberlain had given the Reds the lead just after half-time, and their skipper stepped up and doubled their advantage on the hour mark.

A win would move the Merseyside giants a whopping 22 points clear at the top of the Premier League table ahead of Man City’s clash with Tottenham on Sunday, and so Liverpool are continuing to emerge as the inevitable champions this year.

They won’t be looking that far ahead though even as they continue to rack up win after win, but as seen in the video below, Henderson was on hand to score with a brilliantly composed finish in front of the Kop to send them well on their way towards another three points.

It’s worth noting Roberto Firmino’s brilliant play in the build-up as he grabbed another assist, and Henderson was more than happy to add the finishing touch.