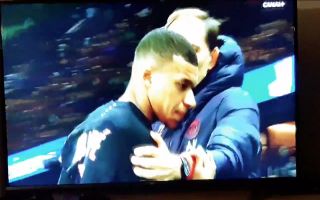 Paris Saint-Germain sensation Kylian Mbappe appeared to be extremely frustrated with boss Thomas Tuchel earlier today after he was subbed off.

The 21-year-old forward got on the scoresheet in his side’s 5-0 win against Montpellier. The World Cup winner was substituted for Mauro Icardi in the 68th minute and his fiery reaction suggests he was annoyed.

Tuchel was talking to the Frenchman once he left the pitch and Mbappe didn’t seem to pleased with his manager’s comments, after a brief talk Mbappe sat in his seat on the bench – looking less than impressed.

Take a look at the moment: