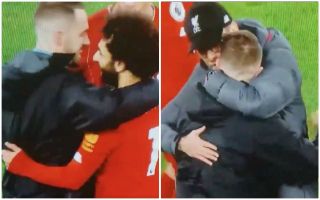 After the full-time whistle blew to confirm Liverpool’s 4-0 win against Southampton this afternoon, the Merseyside outfit’s players and Jurgen Klopp showed their class.

Some of the Reds’ highest-profile players took a moment to embrace former Liverpool forward Danny Ings, Jurgen Klopp even gave the striker a massive hug.

Virgil van Dijk gave his former teammate a cheeky slap on the back of the head and Mo Salah enjoyed a lengthy conversation with Ings.

It’s clear that Ings was a popular figure in the dressing room based on this reaction. Ings spent three years with the Reds before leaving to join boyhood club Southampton.

The 27-year-old has been in fine form this season, his 14 Premier League goals make him the top-flight’s joint-third highest scorer.

Love the respect for Danny Ings from our players + Klopp. It’s impossible to hate this man. ? pic.twitter.com/wV06lD2WBn