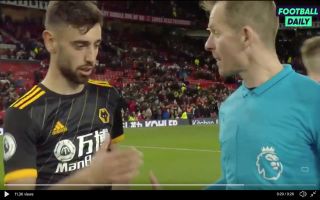 Bruno Fernandes’ debut for Manchester United seems to have been a very special day for the playmaker, with the ace facing off against Wolves – who boast several top Portuguese players.

The 25-year-old swapped shirts with his former Sporting Lisbon teammate Daniel Podence after this evening’s draw.

Podence is in the same boat as his old pal, he too was making his debut. Podence recently sealed a £16.6m move to Wolves, as per BBC Sport.

Before some football fans become enraged with Fernandes’ decision to wear his opponent’s shirt – all of the above should be considered, as well as the poor weather which may have led to him wearing the Wolves top after the swap.