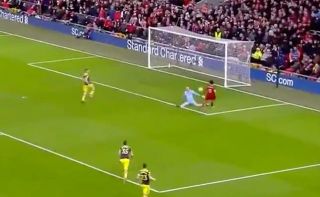 Liverpool were in a rampant mood in the second half of their clash with Southampton at Anfield on Saturday as they went 3-0 up.

Goals from Alex Oxlade-Chamberlain and Jordan Henderson set them on their way to securing all three points against the Saints, but they weren’t done there.

As seen in the video below, Mohamed Salah added a third as he produced a delightful finish over the goalkeeper to find the back of the net.

However, he owes a big debt of gratitude to skipper Henderson, who played a brilliant assist through to find him in behind the Southampton backline as he went from goalscorer to provider for the Merseyside giants.

Despite the desperate attempt of the last defender to block it, it was agonisingly out his reach, and so Liverpool now look set to move a whopping 22 points clear at the top of the Premier League ahead of the remaining games this weekend.

That pass from Henderson! ?

That finish from Salah! ? pic.twitter.com/D0SH9VG6Ab