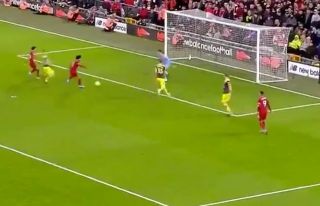 Liverpool secured a 4-0 win over Southampton on Saturday with Mohamed Salah scoring a brace to lead the Reds to yet another victory this season.

The Merseyside giants are seemingly unstoppable as this stage as they continue to rack up the wins and move closer to ending their wait for a Premier League title.

Alex Oxlade-Chamberlain sent them on their way with a breakthrough early in the second half, and that was followed by Jordan Henderson doubling their lead.

Salah then took over with their third and as seen in the video below, the Egyptian international added a late fourth too, although he may have got a slice of luck with it.

That won’t matter to him or Liverpool though, as they continue their relentless march towards the title.