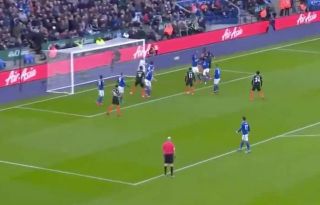 Chelsea wasted no time in finding a breakthrough after the half-time break as Antonio Rudiger gave them the lead at Leicester City.

It was a special day for the German international as it was his 100th appearance for the Blues, and he marked in a great way as he found the opener.

As seen in the video below, he rose highest to meet an excellent delivery to find the back of the net and score what could prove to be a very important first goal of the game.

Both sides had their moments in the opening 45 minutes in what was a decent encounter, but it may take a bit of quality like that seen in the Chelsea goal to separate them as the visitors look to close the gap on Leicester in the Premier League table.

However, they were soon dealt a setback as Harvey Barnes found an equaliser just 10 minutes later to set up a potentially brilliant last half hour in the game.

Hesistation from Schmeichel and Rudiger rises highest to head home ?

A goal in his ?th game! pic.twitter.com/zUmFkAbKET