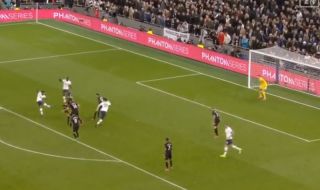 Steven Bergwijn has announced himself at Tottenham in stunning style with a brilliant goal on his debut against Manchester City.

Watch below as the 22-year-old Dutchman, a January signing from PSV, rifles in a quality finish to make it 1-0 against City in today’s big Premier League clash.

What a moment for the Dutchman on his debut! He superbly sweeps it home to put Spurs ahead!

Bergwijn shone in his time at PSV, but the English top flight looked a big step up from the Eredivisie for this young forward.

Still, he’s settled instantly with what could end up being the winner against last season’s Premier League champions.