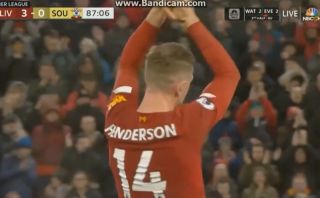 The atmosphere at Anfield is something special at the moment as Liverpool look to be on an unstoppable march towards their first league title in 30 years.

Still, the deafening roar from Liverpool’s stadium yesterday as Jordan Henderson was given a standing ovation as he was subbed off was something else.

Henderson has been an inspiration for the Reds this season, really raising his game to become one of Jurgen Klopp’s most important players.

It’s clear the crowd absolutely love him, as this spine-tingling video shows!