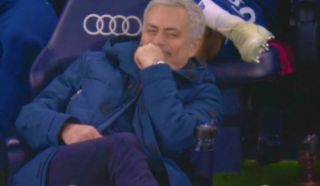 Jose Mourinho may not be be the elite manager that he used to be, but he remains box office entertainment on the touchline.

Watch below as the Tottenham manager reacts to the absolutely farcical goings-on during that dramatic penalty incident in the first half of today’s game against Manchester City.

Me watching the last 5 mins of Spurs vs City game. pic.twitter.com/yYqtR2YELk

Mourinho was clearly as bemused as the rest of us after City were given a penalty by VAR after a lengthy delay, and the drama didn’t stop there.

Ilkay Gundogan missed from the spot, with Raheem Sterling then looking to be fouled almost immediately afterwards, though this time no penalty was given.