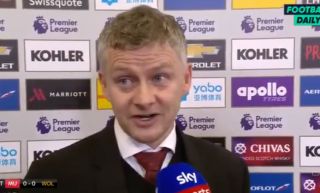 Ole Gunnar Solskjaer made a strange joke about the goalposts being moved after Manchester United were held to a 0-0 draw at home to Wolves.

Watch below as the Red Devils boss suggests the goal moving has to be the main thing to blame for some of his players’ poor finishing in their stalemate at Old Trafford.

Ole with the strangest excuse of the season

?"The ground staff must have moved the goal half a yard to the right. Something must have happened last night" pic.twitter.com/gex1rsf6pF

He’s clearly joking (surely?) but we’re not convinced this is the kind of thing Man Utd fans will want to be hearing from their manager after another poor result.

It’s not been a great season for United and fans will be expecting much better than this if the team is to claw its back way into contention for a top four spot.