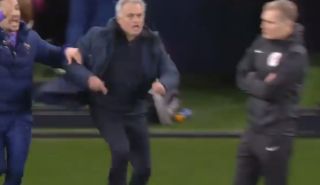 Jose Mourinho was at his brilliant best in Tottenham’s win over Manchester City on Sunday.

The Portuguese masterminded another win over his old nemesis Pep Guardiola, but not without a lot of struggle along the way.

As pundit Ian Wright can be heard saying in the video clip above, Mourinho goes from zero to ten in seconds, rushing over to have very strong words with the match officials.

Sterling stayed on the pitch, but it didn’t matter in the end as Spurs enjoyed an important 2-0 win thanks to goals from January signing Steven Bergwijn and Son Heung-min.