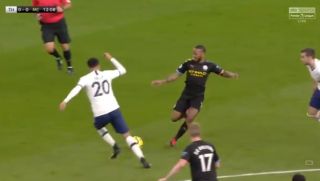 Manchester City star Raheem Sterling looks to have got away with a bad challenge in today’s game against Tottenham.

Watch below as Sterling goes in studs-up on Spurs ace Dele Alli, leaving him on the floor and seemingly in a lot of pain.

Mourinho is livid with Sterling's tackle on Alli but the video assistant referee sticks with Mike Dean's call for a yellow.

This certainly looks like a challenge worthy of a red card, but Sterling managed to stay on the pitch even after VAR took a look at the incident.

Sterling isn’t normally one associated with aggressive play like this, but he really should have been more careful as he’ll surely seriously injure an opponent at some point if he does it again.