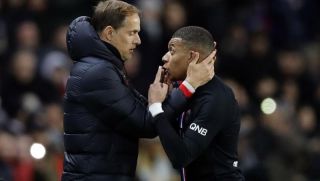 Real Madrid have been handed a significant boost in their pursuit of Paris Saint-Germain superstar Kylian Mbappe, according to Mundo Deportivo.

This comes after the latest bust-up between Mbappe and his manager Thomas Tuchel after Tuchel substituted the forward in their 5-0 win against Montpellier. Mbappe appeared to be livid with Tuchel and stormed off the pitch after an exchange of words with the German tactician.

The France international also raised eyebrows as he also liked Instagram photos of Karim Benzema, Sergio Ramos and Vinicius Junior after their victory against Atletico in the Madrid derby, according to Mundo Deportivo.

Real have been long-standing admirers of Mbappe and a move to the Spanish capital looks likely to be on the cards for the Frenchman, according to Mundo Deportivo.

Mbappe’s contract with PSG runs until 2022 but despite the French club wanting to renew his contract making him a higher earner than his teammate Neymar, the young forward is yet to accept a renewal.

Kylian Mbappe to Real Madrid in the summer?

Real Madrid are closely monitoring the situation and are likely to continue their pursuit of Mbappe in the summer, according to Mundo Deportivo.

While this signing clearly won’t be easy to achieve, and won’t come cheap, Los Blancos will hope this row with Tuchel can make it that bit easier to bring Mbappe to the Bernabeu.