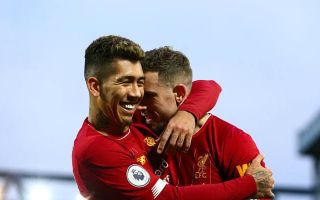 The Reds thrashed the Saints 4-0 at Anfield yesterday and the Brazilian international assisted three of his team’s goals. Firmino provided the passes for Liverpool’s first, second and fourth goals which were scored by Alex Oxlade-Chamberlain, Henderson and Mohamed Salah respectively.

The Reds skipper was all praise for the 28-year-old’s performance in yesterday’s match. Speaking to Liverpool’s official website, Henderson said: “Some of the stuff he does is madness really! But he’s another outstanding player for us and it was another big performance from him. Especially in the second half, everyone put in a really good performance. We’re just really delighted to get the three points, especially going into the break now.”

Firmino hasn’t been among the goals a lot this season but he has had his fair share of attacking contributions. In 36 appearances across all competitions, the Brazilian international has amassed ten goals and 12 assists.

Following yesterday’s win, Liverpool are 22 points ahead of Manchester City at the top of the Premier League table. The Reds’ next fixture is their FA Cup fourth round replay against Shrewsbury Town at Anfield but there’s a good chance many of their senior players will be rested. Following this fixture, Liverpool play Norwich City at Carrow Road after the winter break.