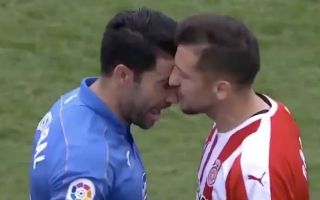 VAR has made a lot of headlines this year. A common consensus is that the video assistant referee serves for little good in the game and only slows proceedings down.

If you’ve been to a game involving a VAR incident, you may know the feeling of being left waiting with little information – possibly one of your players will get sent off? Maybe there was a toenail offside 20 minutes ago?

But today in the Spanish second division, we saw what might just be one of the most surreal VAR moments of all time.

Cristobal, a player for Fuenlabrada, was given a straight red card after the referee mistakenly thought he caught an opponent on the knee with his studs.

The player accepted his marching orders, and was already preparing for the post-match shower, as the commentator says. But the referee was told to take a second look at the incident, kicking off the farce.

Despite the incident taking some time, the referee rightly rescinds the red card, and calls Cristobal back onto the pitch, instead giving him a yellow card for his mistimed challenge.

It takes Cristobal some time, but back to the field he arrives, but… with some unfinished business.

Before play is even resumed, the Fuenlabrada enforcer confronts a Girona player, and the pair square off, head to head.

The referee, literally seconds after rescinding his red card, shows both players yellow cards, meaning Cristobal was truly given his marching orders.

Maybe he just has somewhere to be next week…