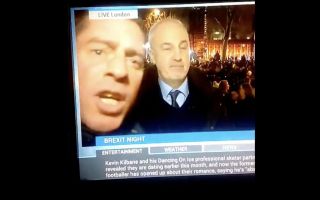 After more than three years of deliberating, three Prime Ministers, and two general elections, the United Kingdom is finally out of the European Union.

Britain left the EU on Friday night, and nobody is quite sure what the medium to long-term future will look like for the country, with details of trade and travel deals yet to be ironed out.

However, with the country so polarised on the issue for as long as anybody can remember, the relief of finally having ‘got Brexit done,’ as the old adage goes, meant it was party time for some.

“God save the queen and Chelsea” has finished me. pic.twitter.com/bVExoWo46K

At least one Chelsea fan was among a group who verbally ambushed a live news broadcast on the night of the Britain-Europe breakup, with an extremely cringey remix of the national anthem, yelling “God save the Queen… and Chelsea!”

Various other profanities are heard from fellow revellers, including “f**k the Pope” for some reason, “Corbyn was always a c**t,” and one gentleman simply screeching “England!”

Another man, seemingly in boisterous spirits, began singing as the presenter wrapped up his report, but the intoxication of Brexit euphoria possibly scrambled his wires, as he sang the “Leaving Brexit on a Friday night” instead of, presumably, “leaving the European Union on a Friday night.” Too many syllables though, it kind of ruins the fun.