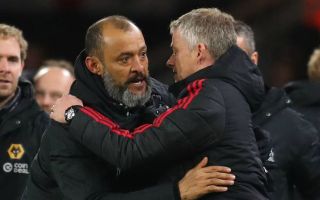 Manchester United manager Ole Gunnar Solskjaer made a very dodgy claim as he looked for excuses for his side’s 0-0 draw against Wolves last night.

Watch below as the Red Devils boss calls Wolves a hard team to play, asking a rhetorical question about how many teams break them down.

"How many teams break down Wolverhampton? They're a hard team to play. I'm very happy with my boys."

Ole Gunnar Solskjaer says Wolves are a tough team to penetrate and that his squad have earned their break. pic.twitter.com/xnvyq0cE12

How many teams, Ole? Quite a few, as it happens, but not Man Utd.

Remarkably, Wolves have just two clean sheets in their last eleven games in all competitions, and both of those have come against Solskjaer’s side.

They also have just one win in their last eight, so despite being a decent side, it’s not like they turned up to Old Trafford on the best run of form.

United have their issues up front right now, of course, but their fans will surely still expect better in a home game, and for their manager to also acknowledge his team’s problems rather than talking up a totally out-of-form opponent as some rock-solid side.