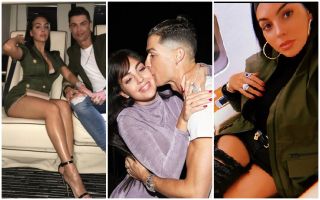 Georgina Rodriguez has opened up on the first time she ever met partner Cristiano Ronaldo and has waxed lyrical about his place in football history.

The pair have built a great life together as they’ve settled with their family in Turin since the Portuguese superstar’s switch to Juventus from Real Madrid in 2018.

Rodriguez was asked about the first time she met Ronaldo, and has outlined the main physical attributes which caught her eye while also insisting that he simply has no rival when it comes to football and what he has achieved on the pitch.

“What grabbed my attention was his height, his body and his beauty,” she is quoted as saying by the Daily Star. “I was shaking in front of him but a spark had gone off. I am very shy and maybe that upset me, even more so in front of a person that with a single look, deeply touched me.

“Later, the way Cristiano treats me, takes care of me and loves me covered the rest.

“He is the only person that can excite me during a match,” she added.

“I am lucky to be the partner of the best footballer of all time. When he is on the pitch I go through an infinite number of emotions. He has no rival.”

A certain Lionel Messi and other legendary figures will perhaps have something to say about that, but putting that tiresome debate to one side, there is no doubt that Ronaldo has written his name into the history books in football for countless reasons.

With a stunning and loving partner and beautiful family at home too, it’s fair to say that the 34-year-old is winning in life both on and off the pitch.