Jadon Sancho to Liverpool transfer speculation is surely about to go through the roof in the months ahead, with a fresh update on the situation making for exciting reading for Reds fans.

Sancho is one of the most exciting young talents in the world at the moment and has long been linked with a big-money move away from Borussia Dortmund, with Liverpool joined by the likes of Manchester United, Chelsea, Real Madrid and Barcelona as rumoured admirers.

The England international is now tipped as “very likely” to leave Dortmund in the summer transfer window, according to reliable journalist Jan Aage Fjortoft.

He does say, however, that one obstacle could be that Liverpool would have to pay a whopping £126million to sign Sancho… 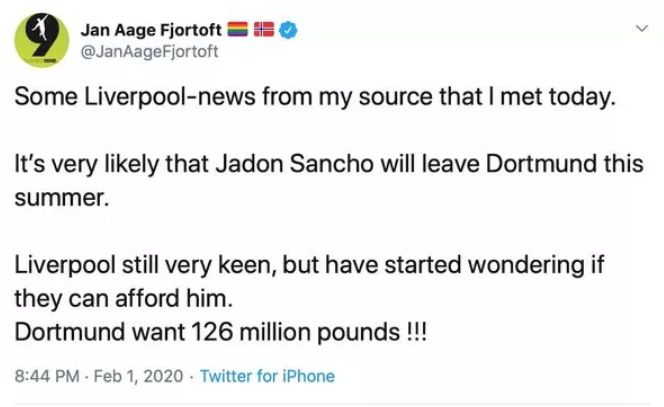 In fairness, LFC have paid big money for players they really want before, having gone that extra mile to land Virgil van Dijk and Alisson in recent times.

It remains to be seen if Sancho would be as much of a priority for Jurgen Klopp, however, as he already has Sadio Mane, Mohamed Salah and Roberto Firmino to choose from up front.

That said, Sancho is an elite talent who would surely get into any team in the world on his day, and £126m could end up looking like a bargain in just a few years’ time.

The 19-year-old has a big future in the game and looks like he could be an ideal fit for Klopp’s style of play at Anfield.