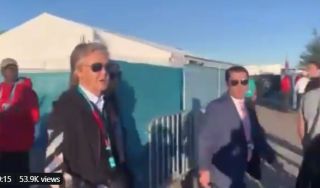 Watch below as McCartney is asked who’s going to win as he arrived to watch the Super Bowl clash between the Kansas City Chiefs and the San Francisco 49ers.

The musician, however, simply answers “Liverpool”, suggesting he perhaps can’t take his mind off the Premier League at the moment.

McCartney has previously gone public as saying he’s an Everton fan and that his family are Evertonians, though he also has a soft spot for the Reds too due to his friendship with Kenny Dalglish.

“Here’s the deal: my father was born in Everton, my family are officially Evertonians, so if it comes down to a derby match or an FA Cup final between the two, I would have to support Everton,” he told Sports Monthly magazine, as quoted on the website Everton Banter in 2008.

“But after a concert at Wembley Arena I got a bit of a friendship with Kenny Dalglish, who had been to the gig and I thought ‘You know what? I am just going to support them both because it’s all Liverpool and I don’t have that Catholic-Protestant thing.

“So I did have to get special dispensation from the Pope to do this but that’s it, too bad. I support them both. They are both great teams. But if it comes to the crunch, I’m Evertonian.”