The United faithful have not hidden their fury, frustration and disappointment with the current ownership and it’s a situation that continues to rumble on off the pitch.

In turn, they would surely welcome the possibility of a takeover, and according to the Daily Mail, Bin Salman is said to still be ‘very keen’ to secure an agreement to purchase the club.

With that in mind, it remains to be seen what it would take for them to green light a takeover, and whether or not Bin Salman will remain as committed to the potential investment for the foreseeable future if there is a lack of progress and no indication a deal could actually be done.

Bin Salman has also been linked with a takeover of Newcastle Utd, and while that would seemingly come at a significantly less cost, it surely won’t be as lucrative and attractive as a potential Man Utd takeover and so time will tell whether or not there is grounds for negotiations to begin.

It’s certainly something that Man Utd fans will want to follow closely, and they will arguably be desperate for something tangible to happen in the near future. 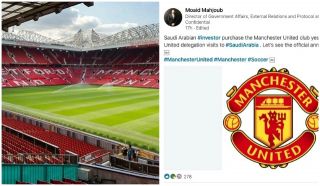