Liverpool already have probably the best team in the world with quality players in every position, but they might be about to get even stronger in the next transfer window.

Going from a variety of reports, it seems the Reds could build on their recent success by adding two more elite young talents to ensure the future remains bright at Anfield.

Bayer Leverkusen midfield sensation Kai Havertz has been strongly linked with Liverpool recently by Mundo Deportivo, who report the Merseyside giants could pay as much as £105million for the 20-year-old.

That would be a big investment, but in truth the way the market’s going, Havertz could well end up looking like a bargain for that price, just as it’s now easy to forget some questioned LFC paying so much for Virgil van Dijk when they brought him in from Southampton in 2018.

Elsewhere, RB Leipzig striker Timo Werner is also being linked with Liverpool, with Bild claiming the £51m-rated Germany international favours a potential move to Anfield as he looks set for a move to a bigger club.

Both these players have shown their quality in the Bundesliga and it’s exciting to imagine how Jurgen Klopp’s first XI could look with both of them in it.

While this might most likely lead to more rotation in midfield and attack, we’ve had a look at a potential line up involving both signings… 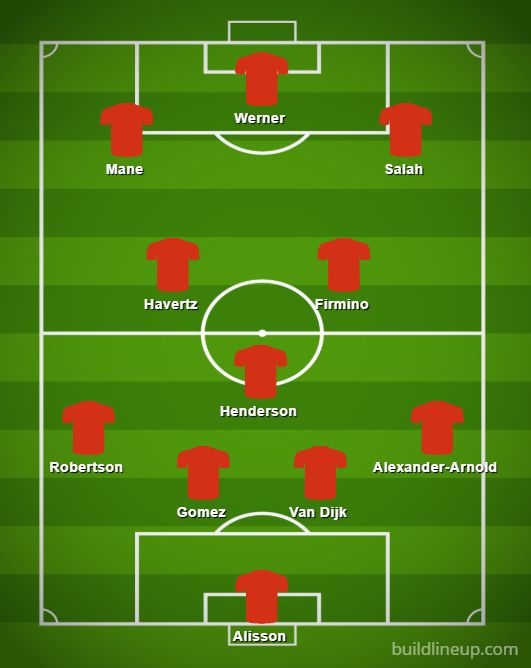 This could require a slight change in formation, with just one defensive-minded midfielder in Jordan Henderson, with Havertz ahead of him, and perhaps a new role for Roberto Firmino in an attacking midfield position as well.

The Brazil international does not deserve to lose his place at Liverpool, but his scoring record is perhaps one weakness in his game which might explain the links with Werner.

Havertz and Firmino could work brilliantly together to provide ammunition for that front three, with Werner alongside Mohamed Salah and Sadio Mane also a truly frightening prospect for opposition defences.